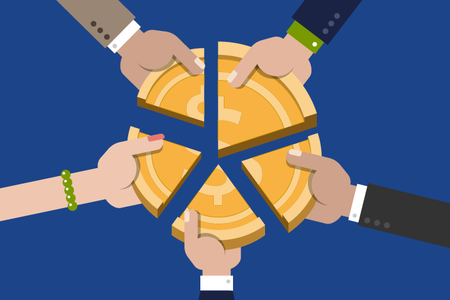 Having walked the talk on this, I can tell you that it's real: big or small, local or multi-national – this works. This lifts sales, lowers costs, jumps profits, as well as staff morale, engagement, and buy-in - making your company easier to manage. Whether you've got a good or bad economy, the results that come from the following can turn a profit killer into a profit maker.

It’s profit-sharing. So how do you do it right?

My inspiration came from conversations with Frank Stronach, founder of Magna International, who implemented 10% pre-tax profit sharing that helped fuel Magna’s ascent to the upper echelons of the auto parts industry. I'm not talking about what he did after he got to the top of the mountain - I'm talking about what he did to get there, and what profit sharing did for my company.

Full disclosure: A few years later, too giddy from growth, I foolishly spread myself too thin. Beyond being blinded by pride, not deterred by the odds stacked against me, I leveraged all the profit the station was making – and would make for years to come – on a monstrous business investment failure elsewhere, that strangled the golden goose.

Nonetheless, here’s how our station staff increased sales and profits again and again; as a small player in the shadow of billion dollar, national competitors. Your circumstances, although different, need to keep the same principles in play:

Profit sharing was introduced at a staff meeting; with the stated purpose being to chart the path ahead based on input from advertisers, listeners and staff. The vision and mission followed (no rainbows and unicorns). Devoid of platitudes and generalities, each item on the agenda was communicated in simple, specific, and practically-applied wording.

Things were kept positive, yet evidence-based (no "maybe if we get lucky" statements). It wasn't a “what I think/command and control/top-down” presentation; but one built on contributions from advertisers, listeners, and colleagues.

Prior to this, I personally met one on one with each colleague for 30-45 minutes. Assuring confidentiality, I asked what they wanted and needed out of life and what they wanted to be doing in 5 years (personally and professionally). I then asked how the company/I could help them get there. Each person identified their greatest character strength and job skill, their greatest need for improvement both personally and professionally, and what they/the station/I could do in helping make that come about. We continued with their identifying what the station is doing best, any problems, and what the station - and I - could do to improve. In conclusion, each spoke to how they could personally best contribute to the job at hand, and what needed to happen to make that a reality.

From the perspective of market/advertiser/listener/staff needs/wants/opportunities, the staff meeting focused on why we’re in business (to increase advertisers’ sales, by way of serving our listeners’ needs and inspiring them to take action with our advertisers), where the industry and our market was headed, the opportunities for station and staff in all of these parameters, and the needed action steps.

By delineating the strategy and action steps, and providing irrefutable evidence as to the effectiveness of such initiatives, the staff could see that although life provided no guarantees, things were in place for healthy growth to become a practical reality.

2. Numbers With Efficacy: The Profit-Sharing Formula

In the first half of my first year, I had no idea when I could ramp up sales as there was so much to be done to improve the station's fortunes that would temporarily restrict cash flow. Although there was no money for wage increases, there would be money for profit sharing. I told the staff that both wage increases and profit-sharing would start with the first quarter of the coming fiscal year (Sept. 1). The more that we could build now, the more that profits would be increased beginning in September.

Warning: don't cheap out - if you've already got cash flow, don't make staff wait beyond the next full quarter.

Our sales staff already had a unique incentive to grow the company in the form of larger-than-industry commission rates. It was time that our non-commissioned staff should also be rewarded for growing the company. Ten per cent of pre-tax profits would be shared by non-commissioned staff each quarter. My own compensation would not be counted in that calculation.  That meant that no matter what I paid myself – my compensation would not affect profit sharing.

So the staff would know that the numbers were real, I had the accounting firm of BDO prepare our monthly and quarterly reviews, plus annual audits. We put the previous fiscal’s statements up on the screen, along with the current fiscal’s category by category budget. We broke down broad categories into more detail to develop an understanding and appreciation as to how different revenue sources and cost centers affected the operation. All the numbers were on one screen, month by month, quarter by quarter.

The staff was then told that BDO would publish quarterly reviews three weeks after each quarter; and that profit sharing cheques would be distributed the following week. That gave certainty of expectation.

Any quarterly loss that would result in no profit sharing for that period would be reconciled in the next profitable quarter; with any positive difference going to eligible staff. If the company - God forbid - ended up with a fiscal year-end deficit after paying out profit sharing in earlier quarters, the employees would keep the profit sharing already paid out and not be penalized. Each year would be a fresh start.

3. What Happened As A Result

Sales and profits grew year after year. The company instantly became easier to manage; as accountability was administered on the front lines, rather than by the corner office. If a staffer heard about a new business coming to town, they went straight to sales and gave them the tip-off; and would cheerfully go to great lengths on their own initiative to help out above and beyond the call of duty. Each person saw themselves as a personal ambassador for the station in the community. We didn't have interdepartmental competition and individual agendas - we had inter-departmental cooperation and willingly shared one agenda:  to grow the company for the benefit of each other.

My favourite (Cdn. spelling) memory of profit sharing as it affected cost-control is when I walked into the newsroom one morning. The mid-day news woman didn't see me coming - so she wasn't looking to score points - as she was admonishing the morning news guy: "Joe, pick that piece of paper out of the garbage and write on the other side - we're on profit sharing, you know!".

The first profit-sharing quarter ended Nov. 30. The cheques (Cdn. spelling) were ready Dec. 22 - what a joy to see each staffer's face when I handed each of them a bottle of champagne and a cheque equal to almost a week's pay, just before Christmas. As one colleague said "I guess this profit sharing thing really works, doesn't it?".

It was attitudes like this that drove morale, ratings, sales and profits such that the staff's achievements resulted in the company being named as one of "Canada's 50 Best Bossed Companies" (source: BDO).

Profit sharing brings out the best in colleagues, directly connects reward with productive work, and grows the bottom line. Kudos to the many fine people willing to make it happen in their workplace.

Your sales and profits increase faster, when you can answer the following question affirmatively: Does your marketing lead your prospect to the upfront and instant conclusion that they'd have to be an absolute fool to do business with anyone else but you, regardless of price?

If it doesn't, it's not working right. I fix that - and it's time to pay it forward.

Sick of increased numbers of competitors trying to eat away at your market share? To what extent is your industry's or company's revenue growth modest, stagnant or declining? Tired of price pressures causing you to discount your products or services to capture more business?